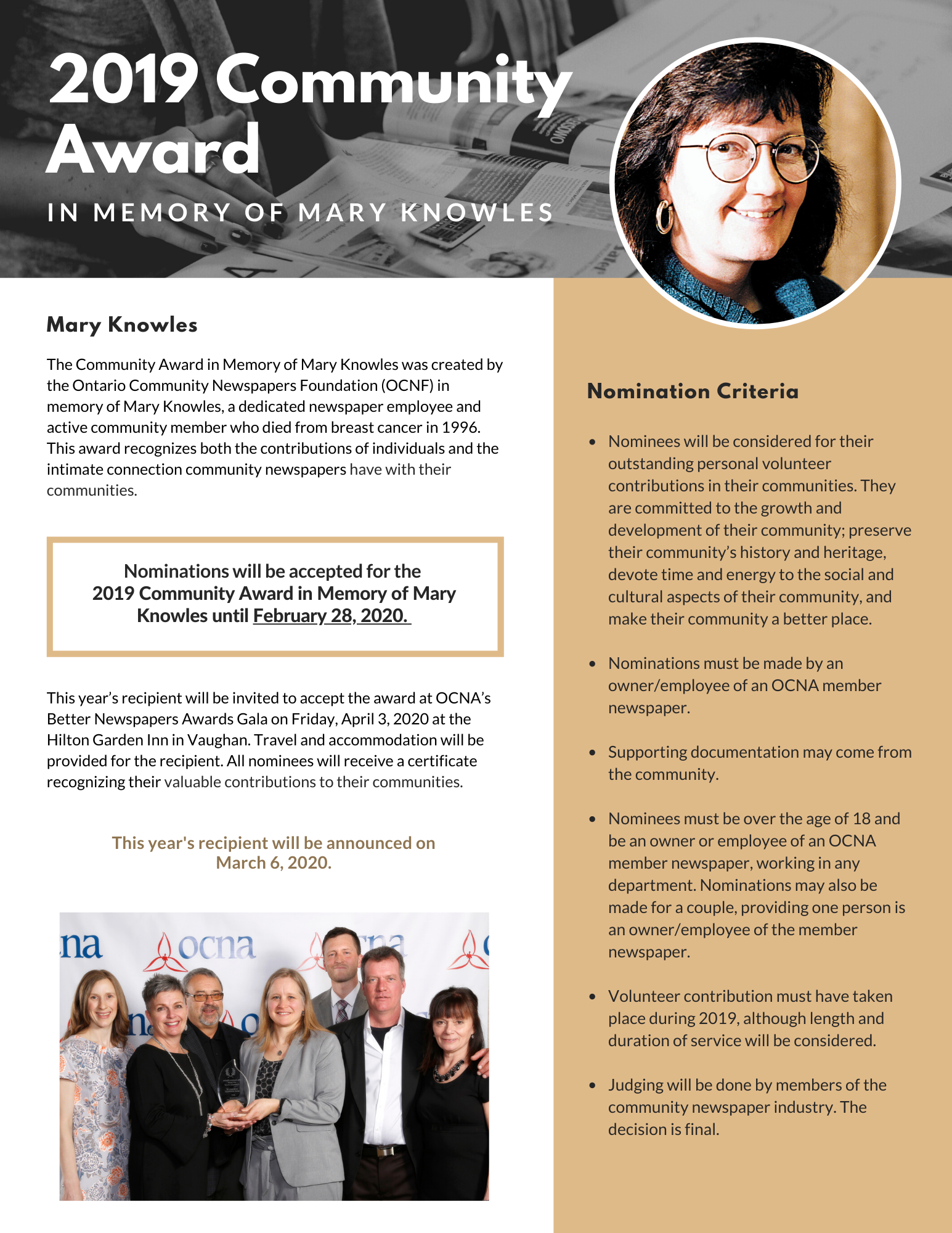 Year after year the Community Award in Memory of Mary Knowles recognizes the industry’s most energetic, dedicated and giving individuals. This year’s recipient, Brent Rankin, Managing Editor of The North Shore Sentinel in Thessalon is no exception.

In 1991, Brent convinced his family to acquire the weekly newspaper in his home town of Thessalon. At the time, he was writing an opinion column and showed great interest in journalism. Immediately after purchasing the publication, Brent took on the role of editor and has been committed ever since to delivering relevant, insightful news and information to readers in his community.

He has adapted and evolved with the changes of print media. He once worked in a dark room developing 35mm film and now uses digital cameras. He started on original Compugraphic equipment and, of course, shifted to computers when technology advancements were made. He has help from a printer in North Bay, but otherwise Brent produces the entire paper himself. The North Shore Sentinel’s only other staff member is an account manager responsible for billing and payables.

One would think his plate would be quite full of responsibility, but not only does Brent run the small independently-owned newspaper, he is also co-manager of several other family-owned businesses including an auto parts store and repair garage, an office supply retailer, a home-heat fuels supplier and an excavating business.

Brent is the longest serving Mayor in Thessalon’s 127-year history. In fact, he was also the youngest elected Mayor after joining municipal council at the age of 21.

He truly cares about his community, which is why he also serves on the Algoma District School Board, the Sault Area Hospital Board, the Algoma District Homes for the Aged Board, and was recently appointed to the Algoma Public Health Board of Directors. Each of these boards require travelling at least one hour both ways for regularly monthly meetings. He has also served on the local Chamber of Commerce and is the longest serving Chair of the Thessalon Public Library.

He is a familiar face and friend to many in the community, and has great respect for those who are working to better it. He often highlights volunteers in the newspaper and recently ran a 26-week feature called the “Golden Oldies” to showcase residents over the age of 85 who are actively involved in various organizations and events.

Brent is married with two children, both of whom are following in their father’s volunteerism footsteps and are committed to public service.

He is an industry and community leader, which is why the Ontario Community Newspapers Foundation (OCNF) is proud to recognize him with the 2018 Community Award in Memory of Mary Knowles.

Brent will be invited to accept his award during the BNC Awards Gala on Friday, April 5 at the Hilton Garden Inn in Vaughan.